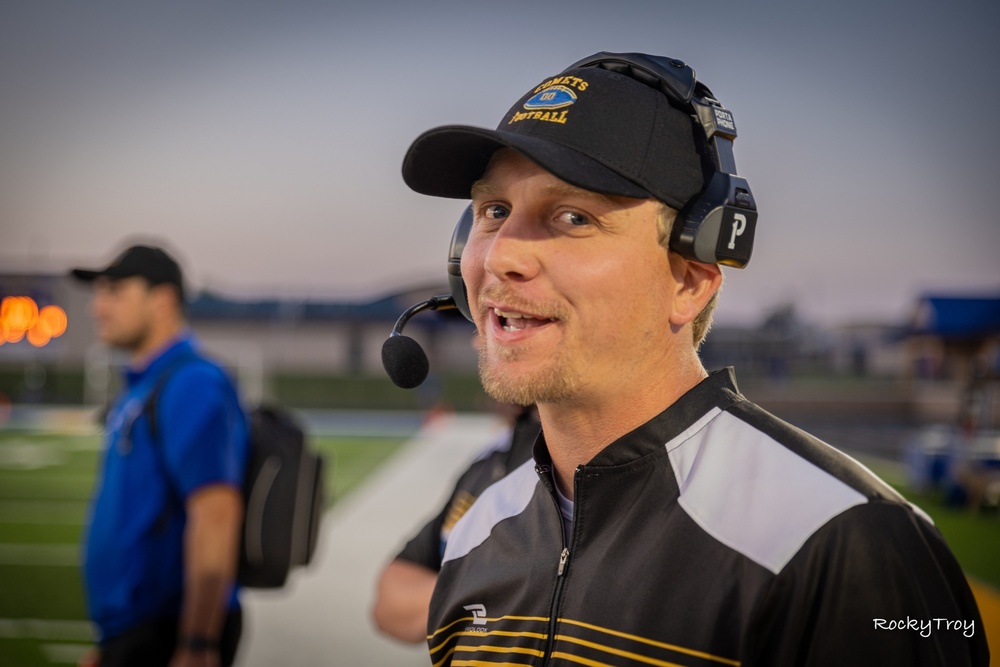 Congratulations to Kyle Polzin for winning Football Assistant Coach of the Year 2022 in the Rock Valley Conference.

Kyle has been coaching football at DDHS for eight years, with the last five years as a varsity assistant coach. He currently serves as the defensive coordinator and running backs coach. Kyle is a strong leader, prepares the defense each week to compete, and earned this award because of his hard work and dedication to the DDHS Football Program.

“Coach Polzin was not only a great coach but a great role model. He expanded my knowledge on the field tremendously by teaching me how to read offenses and pullers. He also helped me off the field with recruiting and just becoming a better man in general. Coach Polzin switched me from ‘Will to Mike’ going into my junior season and told me to trust him. That switch really helped me excel on the field and was a great move by him,” said Ross Gengler, outside linebacker for the Wisconsin Badgers Football Team.

Kyle was nominated for this award by Nathan Wallman, Head Coach of the Delavan-Darien Varsity Football Team. Kyle was one of four coaches to win this award. Each team in the Rock Valley Conference has multiple assistant coaches that they depend on each year to help make the program operate. As the Defensive Coordinator, Kyle is in charge of preparing the defensive players each week for the next game.

Kyle is a DDHS alumni and played on the football team while he was in high school. He was awarded the “Most Consistent Defensive Player of the Year” his senior year (2008). Kyle was a three-year letter winner and awarded 2nd-Team All Conference - Defense in 2008. He graduated from the University of Wisconsin- La Crosse in 2015 with a degree in Elementary Education and a minor in Social Studies. Coaching has always been his passion. It is very important to him because it allows him the chance to work with students outside of the classroom. Kyle is also the head coach for the DDHS Varsity Baseball Team.

“I love to coach because I not only get to help the students grow athletically, but can also help build the character of each individual child,” said Kyle. This is Kyle's eighth year teaching in the Delavan-Darien School District. He is a 5th grade mathematics teacher at Phoenix Middle School.

Congrats Kyle! The Delavan-Darien School District is so proud of you and we thank you for your hard work, determination and commitment to the District.